Lashaun Turner is the CEO and Founder of Urban Starz Media, a global media and leading urban publicist firm based in the United States. The company has grown from strength to strength representing music artists and building exposure in established online as well as print media.

Give us a little background on yourself. What have you done inside and outside of music? What lead you to start Urban Starz Media?

Outside of the business I’m a mother who raised three kids, and now a grandmother. I’ve worked as a Registered Nurse for 25 years, and am an all-around Entrepreneur at heart. I’ve been involved with several business ventures throughout the years and I’ve even sold Real Estate.

The Music Industry and Public Relations however sort of picked me! I began social networking back in the days when Black Planet & Myspace first became popular social networks. I was a very active member of the News sections and forums and began to develop an online persona that I parlayed into my own popular Blog and Radio show known as the “Ms Rant” show. I became a You-Tube partner and was even interviewed by the Associated Press. Eventually I started getting approached by indie artists to do write-ups and features on them and that’s how I was introduced to the indie music industry. After that I became an established blogger & contributor on other popular globally recognized magazines like YoRaps, and Gorilla Leak. I realized that the connections I’d made over the years social networking and my ability to write were a skill set publicists have, and, artists would pay for- so I launched my company with a focus on becoming a strong voice for the Urban Artist and Entrepreneur in the emerging New Media realm that is the Internet.

The world of PR is awfully elusive to most musicians. Can you give us a breakdown of what most music publicists do?

Generally Music Publicists work to get media exposure for Artists through online or print coverage, and via radio or television interviews, radio airplay, and Social Media.

I specifically work in the URBAN GENRE of music with up & coming artists. I have placed clients in HYPE MAGAZINE, SOURCE MAGAZINE AM/FM/STREAMING RADIO, and other premium Hiphop/Urban Culture sites.

What do you find the most rewarding part of your job?

I enjoy helping independent artist who are seriously trying to get to the next level, exceed in their music careers. It’s very satisfying to watch the motivation and encouragement an artist gets when they start to see people outside of their friends and family experience and interact with their music. Recently I was able to place a client in the HYPE Magazine and SOURCE on the same day , the excitement was palpable and the artist and the whole team felt like they were finally getting the recognition they’ve worked hard for. Their efforts are paying off- that’s what I enjoy, helping artists see a payoff from their exposure.

What have been some of biggest struggles you have faced in the industry?

Some of the downfalls I think are related to the fact that these artists are struggling for the most part. Many of them are maintaining jobs while trying to have a music career at the same time. It’s a difficult proposition because to have any measure of success in this industry you MUST invest in yourself and that means you must have a budget. At the same time you have to be able to dedicate your time & energy to your music like it’s a full-time job. Therefore one of the downfalls I run onto is not being able to work with someone either because they have no budget or in some instances if they do, they don’t have time for interviews, questionnaires, making appearances and building social media fans & followers, which are all crucial elements in the exposure process.

Another challenge in working with some artists is that many haven’t taken the time to educate themselves on the business of music and branding. There are a lot of “hobbyist” artists out there.

There is always debate within the music industry on the state it is in, some say it is dying, others that it is evolving. What are your thoughts?

It has definitely changed and therefore I would prefer to say evolved. I think to some extent the MUSIC itself is questionable right now because of the over-saturation of artists now able to put out songs, 3-4 a day (YIKES) lol.. Anyone can download a beat and become a music artist, distribute their songs on ITUNES and now – you have this state of Music.

As an Entrepreneur I see all types of potential to be active in this business called music. The Music industry will never die- but it will continue to change.

At what point do you recommend that an artist start working with a music publicist?

When they have the basics – a manager, a project ( GREAT MUSIC)  and a budget. When an artist has taken care of the legalities of their music, and exhausted the reach of their manager’s contacts-it’s time to look at getting a publicist. If you've managed to build some local buzz and you want to expand your reach- think about hiring a Publicist.

People make a big deal about getting radio play still. Is this still as relevant for the modern artist? If so, how does that work? 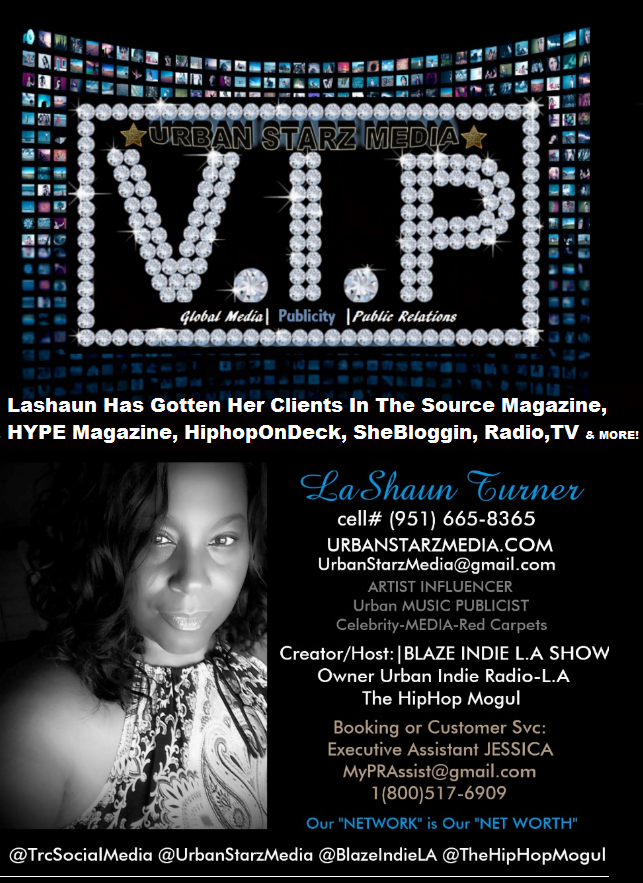 Radio play is mainly through internet stations for indie artists. And yes radio- terrestrial, satellite –all still important. But as we know the Record Labels/ mainstream artists have and continue to dominate traditional radio. There are very few stations and programs on AM/FM radio that will play independent music. There are some but few. So I think its great if you can get it- but, you can still succeed without it initially. Now don’t get me wrong having a song on the radio is MAJOR and a good look no matter what. There are a few major internet radio stations as well tho – and a lot of people do actually stream music on their mobile devices and such. Internet radio is going to surpass the others eventually..

Successful artists are passionate about what they do- beyond driven, more like obsessed.  Work ethic is extremely important. An artist willing to work hard, listen, and learn the business of music is on to a successful path. It’s the old make plan and work it. Strategize build a team and go to work. Making the music is the easy part.

I’ve worked with artists who I thought had great potential but didn’t want to do anything to promote themselves. They turned out to be hobbyist, wanted everything handed to them instead of working collaboratively. Its one thing to hire a publicist to get the exposure opportunity- but it’s the artist who has to engage his/her fans.

Last question: for anyone wanting to work in this industry, what would be your best advice for them?

Step your game up. Learn the business. Get your music legal, copy-written and join a PRO. Surround yourself with knowledgeable an energetic people who support you and can give constructive criticism. Enjoy the ride and whatever else you do- make great musicJ

Got Attitude Give Commands!